Westminster’s Mission of the Month for March is Missionaries to South America Nate and Nikki Bonham. Read below for more information about the Bonhams, their ministry, and ways that you can be praying for them this month. 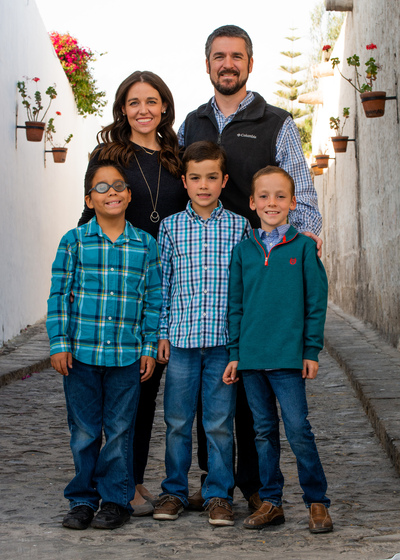 Nate and Nikki’s desire for foreign missions began soon after they got married in 2004. After several years working in secular vocations, Nate received his Master of Divinity degree and Nikki received her M.A. in Christian Education from Reformed Theological Seminary in Jackson. Nate is an ordained teaching elder (pastor) in the PCA.

In 2005, the Bonhams were instrumental in the planting of Madison Heights Church in Madison, MS (a church that many members of Westminster have belonged to over the years, including Channing & Michelle Hodges, Corley & Jennifer Moses, and most recently, Brian and Diane Finnegan!). In 2012, the Bonhams arrived in Latin America, spending their first year in Bogota, Colombia, where they attended language school and served alongside a new church plant. In late 2013, they transitioned to Arequipa, Perù, where they focused on church revitalization, discipleship, counseling, and pastoral and lay training. They launched Seminario Biblico Reformado in 2018, which serves almost 200 students across several countries. Also in 2018, Nate began serving Mission to the World in the role of regional director of South America.

In October of 2019, the Bonham family transitioned out of Arequipa, Perù, and will soon be moving to Medellìn, Colombia, to open a new work for MTW which continuing to extend the reach of Seminario Biblico Reformado. They plan to work toward church planting in the growing cities of Medellìn and Rio Negro. Their desire is to see Christ-centered and biblically based churches planted across South America and they believe that this is accomplished through the Holy Spirit working through ministries of evangelism, discipleship, and mercy ministry.

Before they make their move to Colombia, the Bonhams are spending some time in the United States visiting churches who support their ministry. The current plan is to move to Colombia in May of 2020. While they are back in Madison, MS, and not on the road to visit their supporting churches, Nikki has been able to focus her attention on her sister, Lacey Madden, who is battling a brain tumor. Many of you have prayed for Lacey in her journey and kept up with her story on her facebook page “Love for Lacey.”

Please be in prayer for Nate and Nikki and their three sons: Luis (10), and twins Noah & Barrett (9). They will be visiting Westminster in April, so check for the exact date in weeks to come and plan to hear about their ministry and also to encourage them as they are working to bring the Gospel to South America.

We Need You, Little Toe!

[Palmer] Home for the Holidays

Do You Have a Story to Tell?

Joy in Your Worst Nightmare