In this year’s Advent Sermon Series “When Heaven Comes Down,” Richard is teaching us to see the different people that were confronted with the news of Jesus’ arrival on this earth and how they responded. Last Sunday, we heard about the shepherds who were approached by an angel of the Lord with this news in Luke 2:8-21.

I don’t know about you, but it can be difficult for me to really wrap my mind around shepherds. I’ve never met a shepherd, and even if I had, I can imagine that the life of a shepherd in the 21st century is much different from that of one who was alive during the birth of Christ. I know that they would have been dirty and poor. They wouldn’t have been afraid of much since they had to fight off wolves, bears and other predators. They lived outside and kept watch through the night. One thing that I learned on Sunday was that they were not even allowed to worship in the temple because they were considered to be so unclean. And I assume that most people kept their distance if they saw a shepherd since people became unclean if they came into contact with an unclean person. They were surely lonely and possibly even ashamed of their decided unworthiness.

In Luke 2:7, we read that Mary gave birth to Jesus, and then in verse 8, Luke immediately pans to the shepherds in the field who were up that night watching their flock. The angel doesn’t go to the temple and tell the people who were clean enough to worship, or to the throne rooms to make sure that the political leaders were the first to know, or even to people who were surrounded by other people and would have been able to get the word out to the masses. No, the angel went to the outcast, to the dregs of society, to the ones who weren’t even clean enough to set foot in the temple to worship.

And these shepherds who didn’t scare easily became “terribly frightened” at the sight of the angel (v. 9). Of course the sight of the angel was surely terrifying. Remember that this angel was not the little “Precious Moments” cherub that may have adorned the cover of a Bible that you had when you were little. (No? Just me?) Angels were more like fierce warriors than chubby babies. And, as Richard mentioned on Sunday, when angels appeared in the Old Testament, it meant that life as you knew it was over! So, the sight of an angel would have surely been terrifying in and of itself.

But their fear was surely much deeper. Not only did the angel of the Lord appear, but “the glory of the Lord shone around them” (v. 9). As we’ve learned, God’s holiness and man’s sinfulness cannot coexist. In this moment, in the presence of an angel of the Lord and of God’s glory surrounding them, these shepherds were confronted with their sinfulness. I have to believe that, in the presence of God’s glory, I would not be able to see my sin for anything other than what it is and to see it beside the righteousness of God. And my doom would be sure.

In order to truly understand the good news of great joy that the angels brought to the shepherds that night, we have to see the bad news first. And the bad news is that, without the birth of that Savior, the shepherds would have been doomed. The news would have been that they were, in fact, not clean enough or worthy to be in the presence of a holy God. And that bad news isn’t only for those lowly shepherds. The same bad news is true of the “clean” people who were able to set foot in the temple, for the priests, for the kings, and for you and me! We are all enemies of God. And completely incapable of doing anything in and of ourselves to change that fact.

The fear that the shepherds felt that night in their fields is the fear that we feel. The source of all of our fear is our standing as God’s enemy. BUT, that’s not the end of the story. It’s into that very fear that the angel said “Fear not!” As Richard said, “In Jesus, the way to peace with God has been thrown open to mankind.”

As Jesus lay in his new human form in that dirty, old manger, those dirty, old shepherds weren’t too unclean to approach him. Jesus is accessible to us all. You are not too dirty, too sinful, or too unworthy to approach the throne of grace. All that we can DO is rest in what Jesus HAS DONE for us.

The angels’ song of praise in that field said, “Glory to God in the highest, and on earth peace among men with whom He is pleased” (v. 14). Peace. Not political peace or social peace. Not peace with other men. But peace with God, with whom we were the greatest enemies, but have now been adopted as children. “For you have not received a spirit of slavery leading to fear again, but you have received a spirit of adoption as sons by which we cry out, ‘Abba! Father!’” (Romans 8:15). While to stand in God’s presence once meant certain death and eternal separation from the Father, through Christ we can now come into His presence as beloved sons and daughters. Hallelujah! What a Savior! 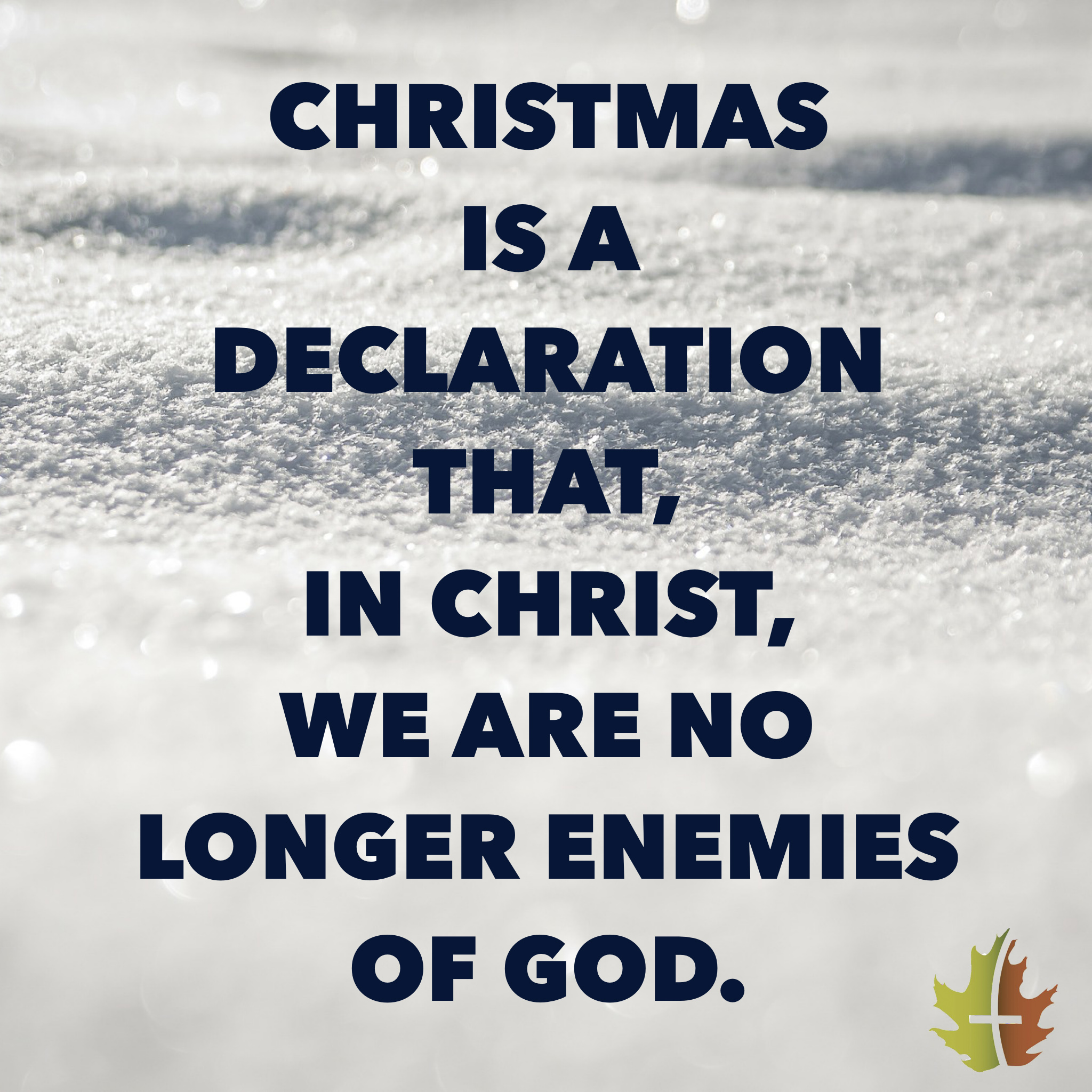 Thank you Kathryn! A reality I hope to keep in the forefront of my mind every single day!