As I sat patiently waiting on the event to begin, a woman came and sat beside me on the front row commenting that her husband would be coming shortly after their son’s basketball game ended. It was obvious this woman had the same excitement as I did to hear our speaker. We had both arrived a couple of hours early to claim our coveted front row seats. While we were getting acquainted, Pam Benton came up and was so thrilled that I had met her good friend, Nancy Guthrie. As Nancy and I sat and talked she shared with me that she and her husband, David, had buried two of their three children. Hearing this was so heartbreaking. I was so unsure…. Do I ask her how her children died? Do I ask such a personal question to someone I had just met? Would I look nosey for asking or callous for not asking?

It was January of 2009. Stephen and I were so excited to be heading to Nashville to hear Tim Keller speak on his second book, The Prodigal God. We both had been profoundly changed by Tim Keller’s sermons. If you were ever near Stephen’s truck, it was almost certain that you would hear Tim’s voice over the stereo. After all, it was Tim’s two sermons entitled “The Gospel and Your Wealth” and “Creation, Care, & Justice” that had convicted us and called us to make some changes in our personal life with our finances and the way we lived. We had been to hear Tim preach several times at his church in New York City, Redeemer Presbyterian. The reason we were particularly excited about hearing him speak this time was the fact there would be an opportunity for us to meet Tim and get him to sign our book. The event was held at Christ Presbyterian Church. The pastor of the church was Dr. Wilson Benton. Pam and Wilson are dear family friends and were instrumental in helping Westminster begin in Greenwood. 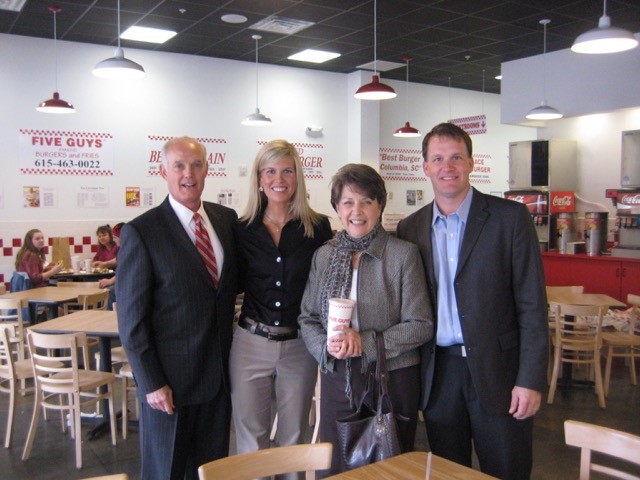 The weekend kicked off with the Benton’s meeting us for lunch along with another friend of ours, Rev. Todd Teller. Todd was the RUF intern at Mississippi State when we were in college. Todd had led a guy’s Bible study which was very encouraging in Stephen’s early days as a Christian. It had been several years since we had seen Todd, so the fact that we were getting to kick off this weekend seeing him and 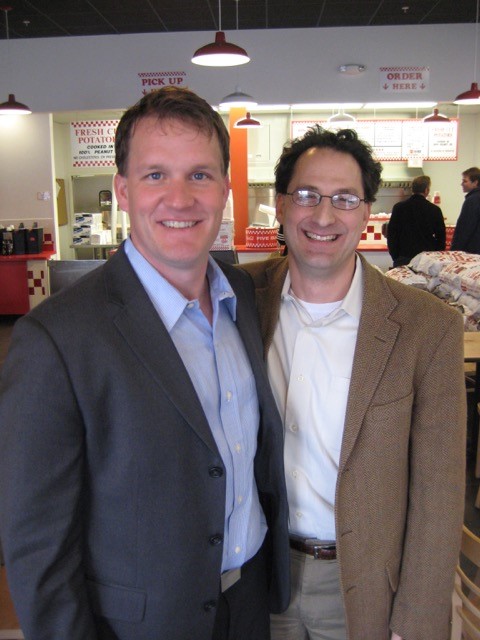 catching up was a treat. Dr. Benton invited Stephen to go with him to hear Tim Keller speak to the area pastors in Nashville that afternoon. Pam took me and gave me the tour of Christ Presbyterian day school and church grounds. It was during this tour that I remember passing a little house on the church property that had a sign out front that said "GriefShare." It caught my eye and I thought I wonder what GriefShare is? Pam and I settled at her house and visited. Stephen called me and told me to come quickly to the place where he had been hearing Tim speak. He said ,"If you hurry, you and I can meet him." This was so fun for us to get an opportunity to not only meet Tim, but also tell him how much his preaching had meant 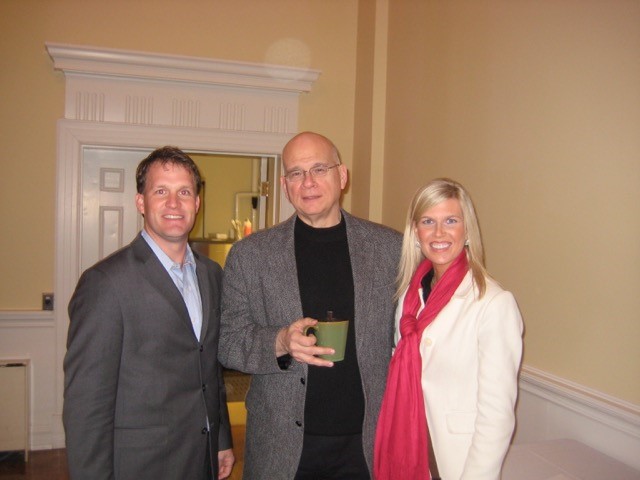 to us. We indeed got a picture (that is proudly on our Wall of Fame). Tim signed two books for us: The Reason for God and The Prodigal God. We cherish the words he signed to us - “Grow in Grace.“ Once we had met Tim, we thought the highlight of our weekend was over. We had accomplished what we came to do. We were anticipating hearing Tim preach at Christ Presbyterian that night. So much so, that we got to the church two hours before it started to claim a seat. Naturally, since no one was there yet, we were able to get on the front row. Shortly after we arrived, another woman who was also anxiously awaiting Tim’s preaching came and sat down beside us… that women was Nancy Guthrie.

This is where an unexpected blessing happened in the mundane….waiting on an event to begin…saving seats….not moving for fear someone would get your beloved spot. But God knew we were to intersect at that moment with Nancy Guthrie. He put us together right then and there for a bigger purpose than us saving seats. After asking Nancy What happened to your two children?, Nancy tenderly shared her story of how she had a daughter named Hope and that they were told hours after she was born that Hope had a rare genetic disorder called Zellweger Syndrome. This congenital disorder would take Hope’s life six months after she was born. She 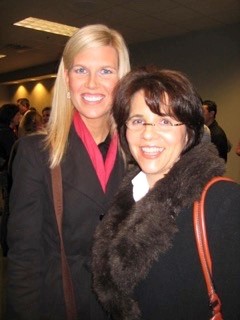 mentioned to me that she had written the story in a book that was up on the book table called Holding Onto Hope: A Pathway of Suffering to the Heart of God. She also shared that she and her husband, David, were the hosts on the GriefShare videos. I immediately remembered the sign outside of the building earlier that day. I asked her to explain to me what was GriefShare. She told me it was a 13-week grief recovery support group. She shared how it was non-denominational, Biblically based, and Christ-centered. She told testimonies of people being comforted in their time of grief by God’s word, knowing that they are not alone. Stephen and I had just finished Jack Miller’s book Outgrowing the Ingrown Church. We were convicted at that time by one of the questions Miller raises in his book: Is your church a country club or a clinic for hurting people? We had felt God calling us to help our church outreach in the community to the broken. It was after this weekend in Nashville that we thought, “let’s bring GriefShare to the Delta!” 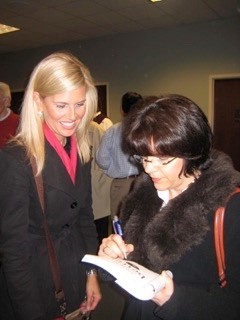 As I quickly learned when I got to the book table that night, Nancy had written many books on grief, had a Dinnertime devotional book for families, as well as books on Advent and Easter. Wow! This was impressive to see someone that I had just met and who had shared such heartache that she and her husband, David, had endured. Nancy had such joy in the Lord, was writing books to help others, and participating in a grief recovery video series, as well as retreats for couples who had lost children. Nancy wasn’t bitter, she was better. In those two hours before the Keller event, I had seen modeled to me what living for Christ looked like. I couldn’t wait to begin Nancy’s book Holding onto Hope. As we drove home from Nashville, I was reading it out load to Stephen and crying the whole way home. Nancy tells the story of giving birth to their daughter, Hope, and being told she had this disease that she would die of. Nancy walks you through the six months of loving and caring for Hope. She is raw in telling you how difficult the road was and their fears. After Hope died, Nancy and David took medical means to prevent them from having any more children since this disease was heredity. To the surprise of the reader, Nancy shares that a year and a half later, after the medical procedure, she is shocked to learn she is expecting. They learn that there is a 25 % chance this baby will have the same disease that Hope was born with. The book closes with David and Nancy learning that, indeed, their son, Gabriel, would be born with this disease and would die, too, at six months of age. It was a book that you read and will never forget.

I had a preplanned trip already on the calendar to return to Christ Presbyterian just a few weeks later. Allison Meek, Cyndi Savage, Sister Kosko and I went to a ladies conference to hear Paige Benton Brown speak. It was during a lunch break that Nancy came by to speak to me and give me a hug. It was at this moment that I told her I had read her book in one sitting on the entire ride home to Greenwood. I told her that I had one question for her. She said “Sure, shoot”…I asked, “When you found out you were pregnant with Gabriel, did you pray for the baby to be healthy?” She looked me straight in the eyes with patience and kindness. It was as if she put her hand on my shoulder and the whole room became silent. She answered me by saying ... “Kim, I prayed for God’s will in my life. Don’t you know that God’s will is perfect for you? “ In that moment, I felt the love of God in such a powerful way. He loves us so much that His will is for our good. She trusted Jesus. She confidently accepted God’s will in her life and she had surrendered all to Him. She did smile and say that her friends did pray for a healthy baby for her.

Nancy also has written several Bible Studies for ladies. What a gift of teaching God has given her! Our women at WPC have studied her book on Hebrews called Hoping for Something Better. We are currently studying her book The Promised One: Seeing Jesus in Genesis.

I came back from Nashville knowing that God is at work in all things. We went to Nashville for one purpose…to meet Tim Keller. We left having met Nancy and David Guthrie. We wanted to bring GriefShare to our community. It would be hosted by our church for the sole purpose of ministering to the broken. We are thankful that our church leadership was on board too and allowed GriefShare to begin 10 months later on January of 2010. We ran GriefShare for five straight years. We have been so blessed by the friends we have met and those that helped serve in this ministry by being leaders, prayer warriors, and refreshment makers. We have watched God heal the broken hearted. He is the only answer.

We are excited to announce the new GriefShare will begin Sunday, February 19th. It will be from 3:00 to 5:00 at WPC. It will run every Sunday afternoon for 13 weeks. GriefShare has come out with all new videos and participant workbooks. Please spread the word and if you would like to help serve, please contact Stephen, Richard or me. I appreciate Richard saying recently that this is WPC’s ministry to the community. He said, “Death is something that unifies us all. It doesn’t know color, economic status, or age.” WPC can be that clinic for hurting folks. The Gospel of Christ and the love of God can turn someone’s mourning to joy. It is comforting to know that we are not alone. As Jere Stansel once said, “Put yourself in a path of blessing!” and God will give you the unexpected.

To register for Griefshare or to learn more, please go to our GriefShare page on the website: http://www.wpcgreenwood.org/griefshare.

In these pictures from the night that I met Nancy in 2009, you can see the joy she had.
What an unexpected blessing she was. Nancy wrote in my book, "Jesus is better, better, better!" To read more about Nancy’s ministries go to www.nancyguthrie.com.

Praise God for unexpected blessings!! Thank you for sharing this story, God's grace is all over it:).

I love you Kim❤ Great work

We Are the Church